Two years in San Francisco is an eternity. A forever of nights on your own rooftop. Working in loud nightclubs. Walking from Castro to Church, having finally found some sense of peace, I am leaving. It may seem I am running from peace, but what I am doing is running towards something else. Coop told me once, everyone runs. If you’re going to run, run towards something.

I let the pavement know me, step by step. The night is so warm, so mild and musky, the jasmine smelling like nights in Jesse’s orbit thick with their syrup-heavy vanilla scent. Tiny roses by Market street walking home from Brad’s, a paper grocery bag of my great-grandmother’s china in my left hand. Did I even begin to touch the spine of this place? I let it touch mine. I broke open my ambition on its doorstep.

Nights on the rooftop on McAllister, looking over Japantown and Fillmore and the Western Addition, towards the glory of the downtown skyline lit up with all my vagrant war mongering. I would wage war on those streets, my own private war of one, fighting against everything everyone told me I could not or would not do.
Maybe Shaun had it right the first time. We spent the second 20 years of our lives undoing the conditioning of the first 18.

If I went on the roof tonight it wouldn’t be that same skyline. Altogether different here, the hills of Twin Peaks lit up like a faerye carnival. San Francisco at night; no, California at night is a magical place. You have no idea until you’ve seen it, the hills lit up in honey-bright tones of wealth and wanting. It goes on forever, this bay, and I may never find the end of it.
It was the sailors who found it, wandering through the straight to find where the sea led, until they came to the wide bay with the future fetch of Berkeley on their left tinged with Oakland, and the bright cameo burn of San Francisco waiting on their right. Nothing would be the same. Now I won't be the same. It satisfies the least of my demands to have this much, knowing I came here, I did this, I made this real and now I am leaving it.

I miss my cousin completely when I walk home from Brad’s. This would be the time when, for a year we waited our whole lives for, we could say absolutely anything. There is nothing I could say that I would find her incapable of understanding the source of, and that is a very fine thing to be able to say about anyone. Turning past Noe I see the flash of her feet in flats, and her face that is my face in other colors, and all our mother’s differences resolved in how I love her.

Saturday was Bohemian Carnival at DNA Lounge. Can I tell you how much I love white face makeup? It's like getting a new face. I fucking love it. Here is an example from a Boho Carni last winter: 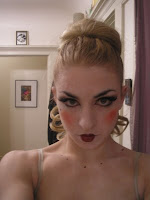 This will probably be the last Boho Carni I see for a while, since I won't be around for the one in June. My moving plans are those of a crazy person. But what else is new.
Posted by Rachel Strickland at 9:12 AM