Rejection feels great and so does Sarcasm

I had just moved to San Francisco with my partner so that he could take a job he’d been offered, and while I insisted it was the right thing to do, I was very grumpy about the change.  I had an established, supportive artistic community in Seattle and no desire to return to the city-by-the-bay and start the process over.  Again.  I had been trained in San Francisco...the prospect of entering a marketplace dominated by my very first mentors and heroes, masters of their disciplines, was daunting to say the least.

So for the first few months nothing much was going on- I was looking for a house for us and training grumpily in the afternoons.  The rest of the time I was putting irons in the fire, one by one, hoping that one of them would catch.  Then ASS called me, and it wasn’t the first time.  If you’re a performance artist in the USA I think it’s a law that ASS has to call you at least once and offer you a spectacular opportunity to travel to their location and perform the most fabulous hacked up 90 seconds of your carefully curated work you can think of, in return for a travel stipend.  Everyone knows it exploitative.  I don’t think I have to talk about that, so I won’t...it’s the entertainment industry.  It’s not well-known for being deeply fair and for it’s excellent working conditions, now is it?  So this particular opportunity had never been a tempting prospect.  But here I was depressed and bored in San Francisco, with Hollywood a mere 5 hour drive and with my career at a sudden standstill.  It was the only iron in the fire that had caught a spark.  Frankly, it was the only thing I had going on.  So I agreed.

Well I don’t know how familiar you are with ASS but esoteric organic performance art out of left field lands one of two ways...they love it, or they hate it, and they did not love it.  In case you were wondering, it was the piece I created in 2012 called Genesis.  It uses a giant petri dish full of water, out of which I perform an aerial hoop solo.  See below: 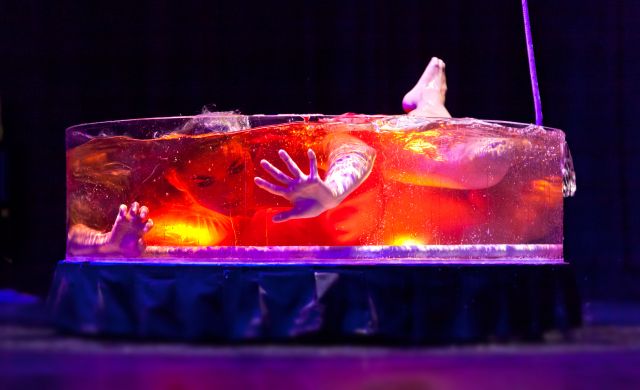 Or rather “the most spectacular 90 seconds” of the routine I could muster.

I did enjoy aspects of the opportunity.  I’m a sucker for a huge stage and it was, as I’ve said, A Serious Stage.  The audience was absolutely gorgeous and could not have been more in love with the acts.  I’m not at all accustomed to hearing people chant for me, much less chant after 90 seconds of work.  And while I was not loved by the judges, I did not get heckled.  Most of the hosts were gracious, for which I am grateful.   Even if one of them did say it looked like I had lost the soap in the bathtub.

Yet in the end, I was still sitting in a rental van with my empty petri dish in the back, having been rejected by the only thing I had going on, which I had felt minorly embarrassed about participating in in the first place.  I don’t know how often you’ve been rejected by someone or something that you’re not interested in, but it does not feel amazing.

So there I was, in Hollywood, with a five hour sad drive in front of me and not much else.  I felt like an idiot for coming here, and for chopping up my favorite piece for ASS.  I was very very close to indulging in that most contemptuous of activities...feeling sorry for oneself.  Then my phone rang.  It was an unknown number.

“Hello?”
“Is this Rachel Strickland?”  What fresh hell is this.
“...yeeees…”
“I’m the creative director at Supperclub SF, you sent me an email a couple of weeks ago with your water act; Genesis I think it is called.”
“...yeeeees…”
“That was one of the most beautiful things I have ever seen.”
"...huh?"

Turns out, one of the pokers in the fire had caught.  I was in such a negative state of mind that I almost felt like it was a prank call, but he got through to me in the end.  Ultimately, the conversation ended in a performance residency in which I got to perform my favorite brainchild act every weekend for two months in my new city.  And not just “the most spectacular 90 seconds” either.   I also found in the director a beautiful like-minded soul and an incredible artist in his own right.  You can see his work here.

I’m sure you’re expecting a moral of the story and of course I’m going to deliver, but I think I can let my friend, the great Ronan Brady of Ireland say it for me, in this most excellent of captures: 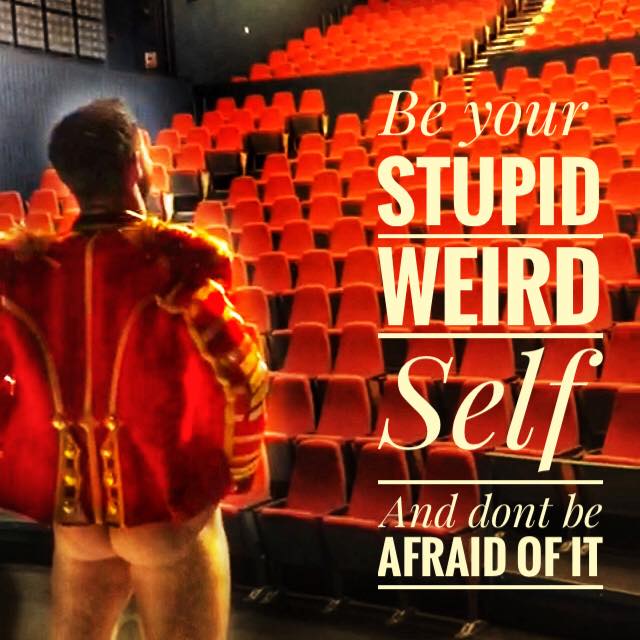 In case you're wondering and I'm sure you are- you can follow Ronan's antics here.  You won't be sorry.

So back to my moral...you can try to cater to a specific company, adjusting your work to suit their aesthetic, needs, and even altering your body to fit into their requirements.  It might even work.  But I would humbly suggest there is an alternative course...which Ronan has illustrated for us so well.

Because what if it did work?  What if you got into the company of your dreams and worked for them for the next 20 years?  What if you were so unbelievably blessed you got everything you tried out for?  In the end, would you be left wondering what was left unexpressed that was YOURS, and not dictated by someone else?

So what if you gave credence to your stupid weird self?  What might that look like?  What if it worked?

Cycle 6 of my flagship creative mentorship course is buzzing away, and we've still got a few spots left for the next cycle of The Audacity Project.  Cycle 7 goes from May 23-July 19th.

This eight week course runs you through a gauntlet of creative excavation and actionable, step by step assignments to get your priorities straight, get your promotional materials in order, and feel your feet underneath you as a working artist.

It's not for the faint of heart, the helplessly lazy, or for people who are perfectly happy and satisfied where they are.  But if you're finding yourself at a crossroads, I made this to help you find your way.  You can learn more here:

The Audacity Project: information and application 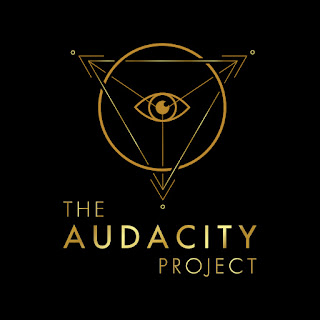 ps. my mailing list ALWAYS gets first dibs...as well as templates, card readings, and other free goodies.  You can sign up for that here:  http://tinyletter.com/rachelstrickland
Posted by Rachel Strickland at 8:43 AM